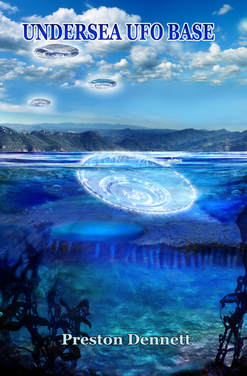 What if I told you that only a few miles from one of the largest population centers on Earth lies a secret undersea base filled with aliens and UFOs? It sounds incredible, and yet, it may very well be true.

I began researching UFOs in 1986. Almost immediately I received reports of unidentified submersible objects, or USOs. The vast majority of them came from one area: the stretch of coastline starting from the north end around the Channel Islands in Santa Barbara, California leading south to San Clemente. The activity seemed to be centered in an area known as the Santa Catalina Channel or more accurately, the San Pedro Channel. Mile for mile it is one of the largest producers of USO reports in the world.

This wasn’t apparent to me until many years later, while writing the book, UFOs over California. Shocked by the large number of USO accounts, I knew I had to include a chapter dedicated solely to these types of cases.

After the book was published in 2005, I wanted to publicize it by excerpting an article from it for a magazine. I looked through the book and decided to put together an article based on the chapter about ocean-going UFOs. More reports were coming in and I thought this would make an interesting study.

Intrigued by the large number of reports, I began to take a deeper look. That’s when I got a real shock. The area was not only active, it was extremely active, much more so than I thought. Objects were seen not only above the water, but diving in and coming out, sometimes both! Several of these cases involved not one or two objects, but dozens or even hundreds. Many of the pioneering investigators in the area already knew about this hotspot.

One thing immediately became clear: the objects had been in this area for a very long time. The earliest reference to USOs in this area that I could find comes from author and investigator, Wishar Cerve, who researched UFO activity in California in the 1920s and 1930s, including some off the California coast. Writes Cerve, “There are hundreds of others who have testified to having seen peculiarly shaped boats which have flown out of this region high in the air over the hills and valleys of California, and have been seen by others to come onto the waters of the Pacific Oceans at the shore, and then continue out to sea as vessels…others have seen these boats rise again in the air and go upon the land of some of the islands of the Pacific.”

Ann Druffel has been investigating UFOs in the southern California area for more than fifty years. Her interest in UFOs began in 1945 when she was just a schoolgirl. She was with her mother in Long Beach, which overlooks the Santa Catalina Channel, when they saw “a bright yellowish object” move slowly across the sky. Writes Druffel, “It then released 15-20 smaller shiny objects, which took varying paths out and away from the main object.”

Druffel was hooked. As an adult, she began to investigate southern California reports. She soon learned that certain places were known as hotspots, producing disproportionally large numbers of sightings. One specific area, she discovered, was particularly active. Writes Druffel, “This body of water lies between the coastlines of southern California and Santa Catalina Island, twenty miles offshore to the southwest. The area has for at least thirty years been the scene of UFO reports of all kinds--surface sightings of hazy craft which cruise leisurely in full view of military installations, aerial spheres bobbing in oscillating flight, gigantic cloud-cigars, and at least one report of an underwater UFO with uniformed occupants…Since 1962 there have been recurring sightings of so-called cloud-cigars over the Catalina Channel in Southern California. These hovering, seemingly energized clouds are reported both day and night, and are accompanied by sightings of smaller disk-like objects miles inland…”

Another early researcher is MUFON field investigator, Bill Hamilton, who writes, “For years, witnesses have seen many types of UFO cruising off the Palos Verdes Peninsula in southern California. UFOs have actually been seen to come out of the water in the San Pedro Channel.”

Dozens of cases, I learned, were already on record. Having investigated several of my own accounts already, it was immediately obvious to me that this area was, in fact, a major hotspot. As I began to plot the encounters on a map, I saw an instant pattern. Nearly all these cases were in practically the same place! What was going on here? Could there be some kind of undersea base? I instantly recalled at least four abductees who had told me that very thing, that they believed there was an underground or undersea base. After the initial investigation, I organized the information into an article. I titled it: Is There an Undersea Base off the Southern California Coast? and sent it off to Fate Magazine. They had published several of my earlier articles and I had high hopes they would publish this one. I thought it made a pretty good case for the possibility that there was actually a base somewhere down there. Notice the question mark? I made the title a question, as I felt that the evidence was good, but it wasn’t quite enough to be conclusive.

Meanwhile, I was doing radio shows, speaking engagements, conventions and occasional television appearances. I was delighted and surprised when I received a call from a producer at the History Channel. He had read UFOs over California and found a particular chapter which caught his interest. Of course, it was the chapter about USOs! They wanted to do a segment based on the chapter and wanted to know if I would be willing to participate? Would I? Were they kidding? Of course, I said yes.

The episode, titled Deep Sea UFOs, aired in 2006 and became hugely popular. It gave the History Channel record ratings, I was told, beating out Ice Road Truckers, then their highest-rated show. This also brought in more reports. Because of the popularity of the show, they called me back to do Deep Sea UFOs II, which brought in still more reports.

Around the same time, Fate accepted and published the article, Is There an Undersea UFO Base off the California Coast?, making it the cover story. The article (published in February 2006) caught fire. It generated a huge response from readers, several of who had their own USO encounters to report. The article was lifted from the magazine and published on the web where it went viral, being copied all over the internet, even into different languages. It was commented on in mainstream newspapers, and I began to get requests for radio and television interviews, and to speak on the subject at UFO conventions.

Meanwhile, the success of Deep Sea UFOs was still making waves. Due to the popularity of the programs, the producer created and pitched the series, UFO Hunters, to various studio executives. Executives apparently loved the idea as it caused a bidding war for the series between the History Channel and the Sci-Fi Channel. The History Channel won the bid and purchased the show. They called me back to appear on their second episode, which would feature USO activity in the Santa Catalina Channel, including some of my own cases. Fortunately, I was able to locate three separate people who had experienced USO activity and were willing to go on television. This, of course, brought still more reports.

Years passed and while I published other books about UFOs, interest in USOs remained high. I continued to get asked to speak on the subject. I also continued to collect reports from the Santa Catalina/San Pedro Channel area. In fact, by now the reports were in the hundreds, and I was finding more all the time, such as the account of a group of boy-scouts who saw multiple UFOs on Catalina Island. My interview with one of the boy-scouts was filmed on camera, and then posted to YouTube. At last count, it has earned more than 46,000 views.

Then, in May 2014, came shocking news. The underwater UFO base had allegedly been found! Radio host and UFO researcher Jimmy Church called me up and said he had some groundbreaking information. Using Google earth, someone had obtained images of what appeared to be an undersea base right off the California coast, in the direct center of where all the USO activity was taking place! The images were startling, and the story again caught fire. There was an apparent undersea base right where I had suspected it would be! And now there were images to prove it.
Around this time, I lectured for MUFON at their annual convention in Irvine, California, coincidentally not far from where all the activity was taking place. MUFON soon posted the lecture on UFO-TV. Before long it had received more than 80,000 views.
​
In 2017, Rob Lowe appeared in an episode of his television program “Lowe-cation” during which he and his sons explored the Malibu anomaly. At the same time, the MUFON UFO Journal published an article about the so-called base. People were obviously fascinated this subject. In my MUFON presentation, I could only skim the surface of what I had discovered. I knew then it was time to write a book. In fact, I was getting emails, inquiries and an offer from a publisher. By this point I had collected enough data to prove that something very unusual was happening in the waters directly off the coast of Los Angeles, perhaps even an undersea UFO base.

This book is the true story of my years-long investigation into UFO and USO activity in the Santa Catalina Channel area, and the incredible discoveries that followed. 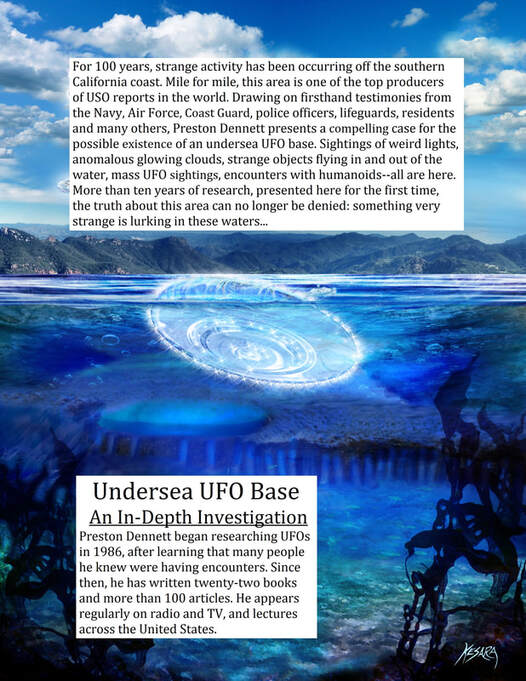 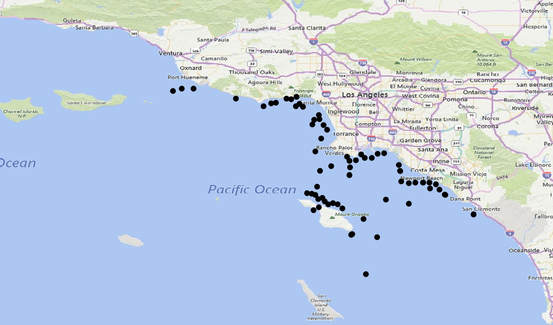 Map showing the approximate distribution of UFO sightings above the water off the coast of Southern California. 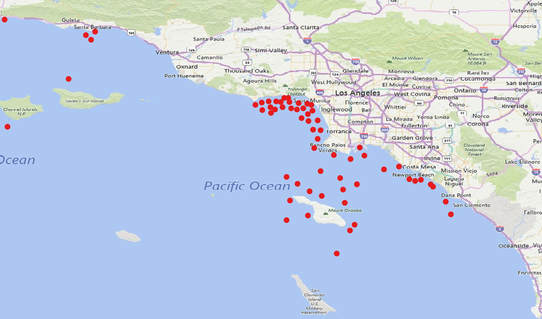 Map showing approximate distribution of USOs off the California Coast.